How would you change your life if you could change anything? Just over a year ago I started making serious changes that have brought me further than I ever imagined I could go in such a short time.

I have now published two books and a journal:

Thriving Not Surviving: Bravely Pursue a Life That Will Blow Your Mind!

I am learning a lot about children with autism as I work with my sister on our website Accessible ABA.

And now I am part of a collaborative team of people who have come together with a shared mission – to help everyone live their best life. Each of us have gone through our own struggles, faced challenges that we weren’t sure we would overcome, and yet continue to work to make our lives better than we ever imagined! We call ourselves the Best Life Collaborative. Our plans are still being developed but our group continues to expand as word gets out. I hope you will join us, whether as a follower or a contributor. Together lets live our best life!

I have always wanted to be a writer. From the time I was a little girls I loved reading and dreamed of being the person who created the books I loved. I wrote stories, then bound them together in collections of short stories. My mother kept a couple and I have them now.

And now, the book I’ve been working on with my sister has officially been released on Amazon! I don’t know where this road might take me but I love the journey I am on. Links to our book are below (click the image to go to Amazon). There is more to do in order to promote these, and that in itself isn’t a small task. But I feel like I’m moving forward, making progress on my dreams. I’m thrilled to share this journey with all of you!

We have also made a companion journal available. I’m particularly excited about this as it will help parents follow the process on their own and provide enough space to record everything they need in one place:

For years I had a dream of becoming an author. As a child I wrote stories and bound them into books. My mother had kept two of them and I remember clearly how much I loved writing even when I was young.

As I grew up I followed the script that had been written for me. I was raised to believe that the answer to having a good life was to go to college, get a good job, get married and have kids. Honestly, it didn’t even occur to me that there was another way.

I went to college at the state university, working to support myself financially and taking out loans to pay for tuition. I have always been fortunate that school was easy for me so I didn’t have to work too hard to get good grades. After I graduated I started looking for an entry-level position somewhere. My degree in Spanish and Linguistics didn’t lend itself easily to a career in New England so I got a job as an administrative assistant in a company that managed retirement accounts. I was on my way to being a success, doing something I really had no interest in doing.

I met my (ex)husband in college. We didn’t have much in common except a desire to be successful. When we were dating we fell into a routine of me tagging along to do things with his friends. It seemed fine at the time. After a while we moved in together and I stopped tagging along and stayed home while he went out. We eventually bought a house and got married. The house was a duplex that we renovated. Renting out one of the units while we lived in the other gave us a bit of extra income and a feeling of success. Eventually we had kids, another checkmark in the list of things that I hoped to accomplish.

We got into the routine so many people are in: go to work, take care of the kids, watch a couple hours of TV, go to bed so we can do it all over again. What happened to our goals? What happened to my dream of becoming a writer? Was there anything more or was this all there would ever be?

This morning, when I woke up and started thinking about what I wanted to accomplish today it occurred to me how different my life is from the one I thought I was supposed to have. Or, maybe more importantly, I thought about how the life I plan to have is nothing like the one I used to think was “good.” And even more, I want that for my children.

Over the past several years I’ve learned that there is more than one path to be followed. I’ve discovered that the possibilities really are limited only by our own beliefs, our self-doubts, our fears. I’ve found out that I can live the life of my dreams if I’m willing to let go of my old beliefs and put in the effort. And that’s what I am going to do.

If I choose, I can spend my life creating things of value. I can do things I believe in, things that I know are important…not just to me but that are important to others. I can wait to be in a relationship with someone who understands all this and who wants it too.

And I can teach my children that they get to live the life that is right for them. I want them to go to college, but I don’t believe that’s the only way, or even the best way, anymore. So if they decide not to go to college I support that, as long as they have another plan. I would love for them to get married and have babies for me to play with, but I don’t believe they should settle for someone who isn’t right because getting married is more important than being happy.

I’m still fighting my fears, my self-doubt. I’m not immune to that just because I’ve grown. But I will conquer my fears. I know I will. I have done it before. The first time is the hardest. Now that I know I can do it, it’s much easier to do it again. And so I keep pushing forward, toward the life I know I deserve.

When my second child was born my oldest was thrilled. She was just 15 months old at the time and she loved the little bundle we brought home. Until she wanted my attention and I was busy with the baby.

As parents, when the second child is born we have high hopes that the siblings will get along. The truth is, sibling rivalry starts early and if left unchecked can lead to years of anger and frustration – both for you and your child. I will admit, that I never thought about this when my kids were little. It wasn’t until they were much older that I started to look into how to get the girls to stop fighting that the light dawned.

By anyone’s standard I’m a good parent. I have always been a great mom, but as I read books like Siblings Without Rivalry: How to Help Your Children Live Together So You Can Live Too

I realized what I was doing to contribute to the problem. Um, maybe it wasn’t such a good idea to make getting ready for bed a race. It worked beautifully. “Come on girls. Let’s see who can get ready for bed first!” Off they’d run, without a complaint. We were all happy. But maybe there was a better way.

In working with my sister, I’m discovering how much harder it is when one of the siblings has autism. January we have dedicated to the topic of siblings. Check out these posts for more information:

We have one more post coming next week on the topic of siblings before we discuss other ideas. Please join us on this journey. Follow our blog Accessible ABA and let me know what you think! 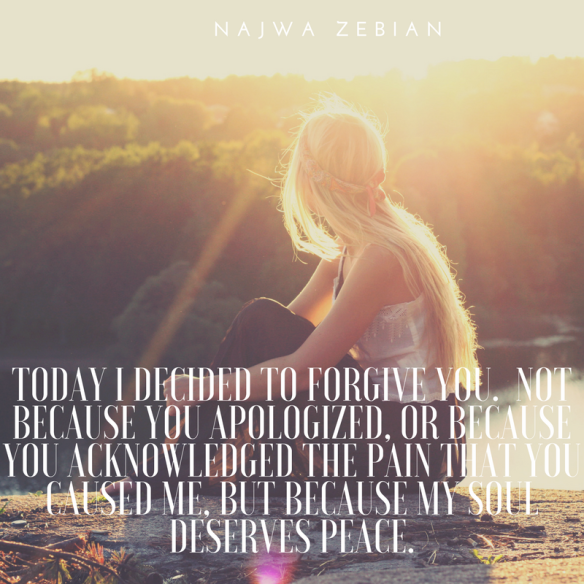 “Today I decided to forgive you.  Not because you apologized, or because you
acknowledged the pain that you caused me, but because my soul deserves peace.” – Najwa Zebian

Pin this to reference later!

Join 294 other subscribers
Follow Thriving Not Surviving on WordPress.com